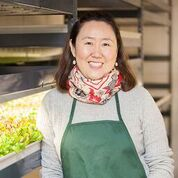 Former Chef Sonia Lo is Setting a (Much) Bigger Table

Sonia Lo may be the CEO of one of the nation’s most efficient – and one of the few profitable – hydroponic farms, but she isn’t that far removed from her days as a personal chef.

“You might say I spent time cooking up some pretty ambitious plans as well as more than a few fabulous meals,” she says with a laugh.

She’s been an angel investor in 15 companies, speaks seven languages, has lived and worked in 16 countries, and holds a third-degree blackbelt in Tae-Kwon Do, but her recent role is as Chief Executive Officer of FreshBox Farms, in Millis, the first of several hydroponic operations planned in locations across the US.

Indoor hydroponic farming in the US – a fancier, more accurate term may be Digital Distributed Agriculture, or DDA – is doing a booming business in leafy greens, with no end in sight to its growth potential (no pun intended). The market is currently $6 to $9B per year, and forecasters believe that over the next 10 years, 50% of all greens will be harvested indoors through some form of DDA growing.

And FreshBox Farms greens are non-GMO, grown without pesticides, herbicides or other scary stuff – and they’re kosher, the only Bay State grower to achieve the designation.

Back when she gave a TedX talk about the meeting of food and tech, Sonia explained that growing food in indoor, urban or suburban locations means that agriculture as we know it is disrupted. “We’re growing crops previously grown only in certain geographies, constrained by arable land, water and weather considerations. Thanks to DDA, those greens will be grown year-round anywhere in the US.”

And the ‘new’ way to farm will give way to a new type of farmer, says Sonia: some estimate more than 100,000 jobs will be created as this thriving industry redefines what it means to farm and be a farmer.

And that, as they say, is plenty of food for thought – appropriate for a chef-turned-entrepreneur.